Sophisticated Animation & Interactivity into InDesign & Out to HTML5 (in5 v3.1 New Feature)

For a long time, in5 users have been wanting to include content from Adobe Animate or Tumult Hype in their projects.

And there has been a way to do it with HTML files and the Web Overlay panel (used by DPS/AEM Mobile, but supported by in5)…

But InDesign has supported a more natural approach for most designers: placing OAM files (packages of HTML from animation apps) directly on the page.

I’m pleased to announce that version 3.1 of in5 also supports placed OAMs.

Check out the video below to see an example of an OAM with complex animation and interactivity exported with an InDesign document.

It’s just one of the ways that in5 v3.1 puts more publishing power in your hands without having to code.

You can subscribe to get updates on in5 releases.
Comments (1)

Now that Titmouse’s new series Motorcity (mentioned in the previous post) is about to air, they’re sharing some behind-the-scenes magic.

In this video, Supervisor Animator, Allison Craig shows off the Facinator tool that I built for Titmouse:

Since the folks at Titmouse rendered their 2-D characters from every conceivable angle, they asked me to build a tool to rotate the detailed 2-D heads in 3-D space. You can see this in action starting at the 1 minute mark.

The 1st episode of Motorcity airs this Monday, but you can see it early (for free) on iTunes.

Check out this awesome behind scenes video at Titmouse from G4TV.

If you’ve got quick eyes, you can also spot Facinator in action.

Introducing FrameScrub, the lip-syncing tool for those who want to go panel-less.

It works in most ways like the selection tool: you can click to select, double-click to edit, but you can also scrub-slide through graphic symbol frames.

You can even scrub through loop settings (using the Alt/Opt key).

Open the MXP file in Extension Manager, follow the steps, and restart Flash. If you don’t see the FrameScrub in your toolbar (behind the selection tool), you can add it by accessing Edit (Flash on Mac) > Customize Tools Panel… Select a tool position, locate FrameScrub in the list on the left and use the right-facing arrow button to add FrameScrub to the selected tool position.

Update (11/29/12): I didn’t realize until someone pointed it out, but there’s no direct way to add a keyboard shortcut to a custom tool. To help with this, I’ve add a Command to the extension that will activate FrameScrub. A keyboard shortcut can then be added to that Command.

On a few occasions, I’ve had to open Flash CS5.5 files on a machine with CS5. Since the FLA format is now XML- and ZIP-based, it’s relatively easy to unzip the package, open a file, and set the version back so that the file can be opened in Flash CS5. It does, however, take time. So I decided to make this process into an easy-to-use desktop application. 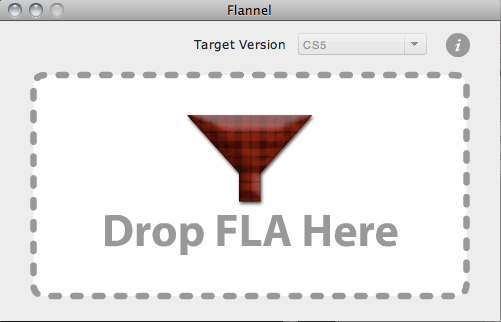 Just drag and drop a Flash CS5.5 (or CS6, or CC) FLA file onto Flannel and it will make a copy and append _CS5 to the file name. That file can be opened in Flash CS5 (or later). Conversion for CS4 is a little trickier, since several new elements were added for CS5, but I’m working on it.

You can install Flannel using the badge below.

Please upgrade your Flash Player This is the content that would be shown if the user does not have Flash Player 9.0.115 or higher installed.

Or you can download the file directly Flannel.air (Adobe AIR is required).

Flannel is available at no cost, but donations are welcome.

If you like Flannel, you should also check out the numerous Flash Extensions and other tools that we have available.

I had a customer who was losing Flash configuration data due to roaming profiles in Windows, similar to the situation described on this forum thread.

So, I wrote this script as a potential antidote to that problem. When the script is run (by opening with Flash Pro), it will allow you to either back-up or restore all of your configuration files for that installation of Flash Pro.

In certain specific cases (no guarantees)—where the machine, the username, and the Flash version remain consistent—this could be used to maintain a SmartMouth activation (as well as other extensions and settings) through a Flash, CS, or OS reinstall.

The script is pretty experimental at this point, so please use with caution.