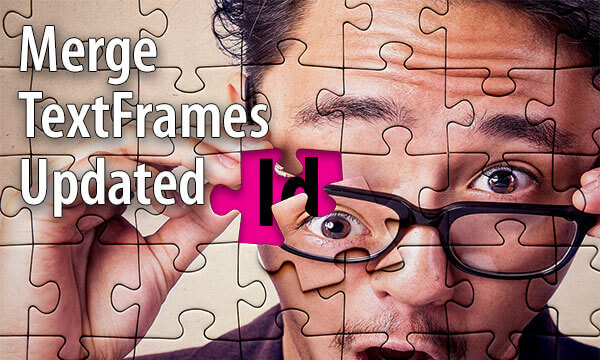 Way back in 2008, I wrote my first InDesign extension at the behest of then InDesign Product Manager, Michael Ninness.

The MergeText Frames extension combines multiple textframes into a single frame so that your text can easily be edited.

This is especially useful if you’re using the PDF2ID extension from Recosoft.

It was wonderfully promoted by the community and has been one the most popular items on my site ever since.

Why update it now?

There are two main reasons that I’m releasing this update.

There are three main, major changes in this update.

Previously—if you didn’t like the result of the merging—you had to undo all of the tens of steps that the script used to accomplish the end result. No more.

You can now undo the script in a single step.

The Merge Textframes settings make this script extremely powerful, but if you want to apply the same settings repeatedly, you had to re-enter/select them each time (or modify the code in the script to default to your preferred settings). No more.

The script now remembers your previous settings and loads them into the dialog.

The Scripts panel is great, but who wants to have it open all of the time (with the other 500 InDesign panels that you need)?

Previously, if you tried to merge frames and any of them were part of a linked story, you would get an error.

The latest version takes care of that for you by unlinking the text frame automatically before it gets merged.

Additional details on the extension are available in the original post and this update.