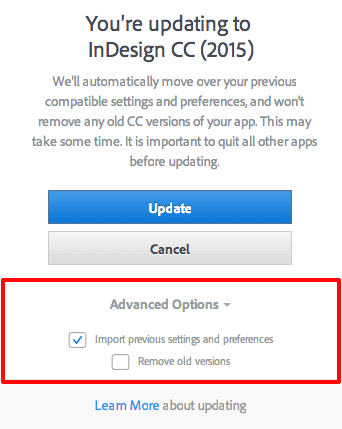 Adobe has designed the new default installation behavior so that a CC 2015 app overwrites all previous versions of the application (InDesign CC, InDesign CC 2014, possibly InDesign CS6 if it’s linked to your CC account).

in5 is licensed to the version of InDesign, so before you install InDesign CC 2015 (but after you click the Update button next to InDesign CC 2015), make sure to sure to deselect the Remove old versions option. That should prevent you from losing versions of InDesign where you have in5 activated.

More words of caution about installation below.

If you’ve installed the English-language version InDesign CC 2015 it will come with a new “Technology Preview” called Publish Online. Publish Online lets you export and upload your document to Adobe’s Creative Cloud. Once the upload is complete, you will receive a public URL where your document is visible. Under the hood, InDesign has converted the InDesign document to HTML and uploaded it to Adobe’s server. This is similar in some ways to what in5 does, so we want to take some time to explain the similarities and differences between in5 and Publish Online, and the respective advantages of each.

Convenience. Publish Online does not give you the HTML output files. Instead, it uploads them directly to an Adobe server and provides you with the URL to the upload location. This is a nice convenience if you don’t want to deal with uploading your files to a web server. It also means that the files will not be hosted on your company’s server, so the web address will be branded by Adobe, rather than your company’s name. It also means that you don’t control the output files: you can’t update them, re-purpose them, or move them elsewhere.

For those who simply want a quick way to get their content to the web, and don’t care about control or branding, Publish Online is a good way to go. Also note, the Publish Online preview currently creates a new URL each time you publish. So, if you send a URL to colleagues, then update your InDesign document and republish, your colleagues won’t see the updates unless you send them another message with the new URL.

Cost. If you already have an Adobe CC subscription, the new technology preview is free (if you’re an English-language user).

It’s now been almost 3 years since the Kickstarter project that launched in5. We’ve been busy making additions ever since. So, it’s to be expected that in5 will be further along in its development than Publish Online. However, there are also some key differences that are likely to persist as well. The differences listed here are accurate as of the release of CC 2015 and the writing of this post. 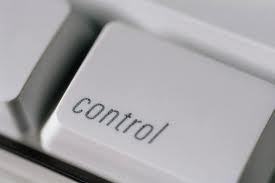 With in5, you own the files. As long-time users of design software, we care very much about ownership of our files. We know how important it is to be able to make a simple update to our files (e.g., changing a copyright date or email address) several days, months, or even years after launching. Perhaps even after we no longer have access to the software that we used to create the original files.

One of the inherent advantages of the HTML file format is its flexibility with respect to making changes: HTML is saved as a text file that can be opened by any text editor. The “editability” of HTML has always been a high priority for in5, as we built in5 as a tool that would let users to edit their own files and implement any changes as needed (if they so desired).

So, unlike Publish Online, the files that you export with in5 are available on your local machine and are yours to keep and re-purpose as you see fit. With in5 output, you can:

Several Adobe technologies have come and gone and/or evolved over the years (e.g., Flash has changed dramatically, nearly everything built on Flex is gone, Adobe Version Cue no longer exists, Forms Central is gone, Adobe Stock came and went and now is back in a different form, to name a few). For this reason, I have personally felt uneasy about leaving my content on certain outside (e.g., Adobe) servers, since my files could disappear or be changed without my awareness or control.

Note: InDesign CC 2015 also removes the Folio Overlays panel. DPS is essentially “on hold” until Adobe comes out with a new version of their publishing solution. This leaves InDesign CC 2015 with less capability to create interactivity than CC 2014. This may be another reason to put off upgrading.

Hyperlinks in Text. in5 includes working hyperlinks in the output, even when rendering text as images. Publish Online does not support hyperlinks within text in CC 2015 (which means that links within Tables of Contents will not work, either).

Format Options. In addition to being able to re-purpose your files, in5 also offers several 1-click format options right out of the box. For example, in5 lets you create a Web App that can be installed to a device’s Home Screen without the need for App Store approval.

Multiple Page Sizes. in5 supports documents with variable page sizes (e.g. having a longer, scrollable page). Publish Online does not.

in5 can be installed with Adobe Extension Manager (which now may be found in the Previous Versions section of your CC Desktop App). However, in order for InDesign CC 2015 to appear in Extension Manager CC, you may first need to install another CC 2015 application (in my case, Photoshop CC 2015 did the trick). 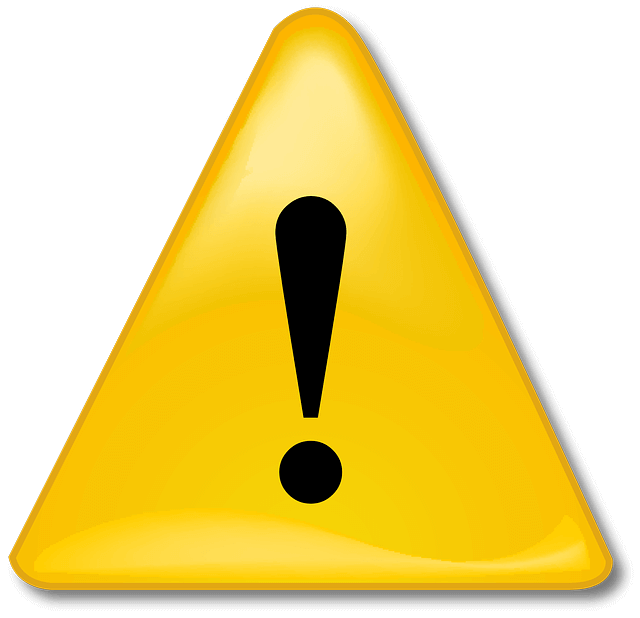 We’re busy developing a workaround and will be posting it for our users ASAP.

As mentioned above, because the InDesign team has modified the file format, and CC 2015 is a separate application from all previous versions of InDesign, activating in5 in CC 2015 will require its own license seat.

New custom installers for in5 are now available. These installers no longer rely on the Adobe Extension manager.

The main new feature that will be relevant to in5 users is Paragraph Shading, which lets you add a background color to a paragraph (or paragraph styles). in5 will offer support for this feature as a free update to v2 license holders in the near future.