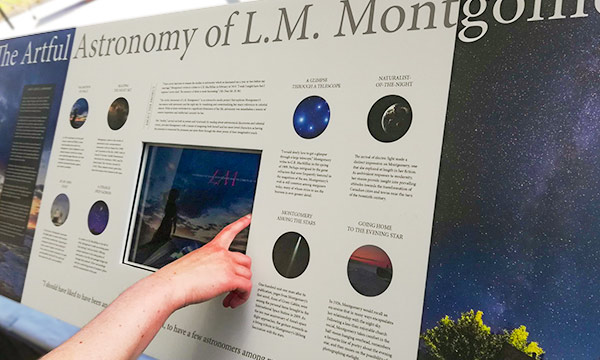 Dave teaches in the English Dept. at the University of Prince Edward Island.

The project was part of a digital public humanities project on Lucy Maud Montgomery’s interest in astronomy and the night sky. 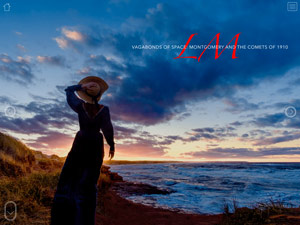 Dave wanted to have long, scrolling pages, as well as non-linear navigation (the ability to jump to different sections) to create his digital experience.

The layouts were done in Adobe InDesign, with a few Overlays and other interactive additions applied, then exported to HTML with in5.

The in5 output was then embedded into an offline iPad app using KioskPro.

“KioskPro worked like a charm. It just pairs really well with In5. I ran my interactive display all week at the conference I was attending, and I had no issues whatsoever. And that’s with a lot of people hammering away at my iPad.”

Dave was kind enough to share of version of his app so that I could record the video demo below.

How was the experience of creating the app?

“I think it was a neat experiment in trying out new ways to deliver academic research to a general audience. And something I definitely plan to continue in the future.”

Using in5 & KioskPro for iPad apps:

“I suspect anyone with an iPad who uses in5 would find it an especially useful tool. I used the KioskPro Plus version, but the basic app would have worked just fine, especially since I was just adding the html from In5.”

“My favourite KioskPro feature: the app screensaver, which cycles through videos automatically. That may sound small, but it enabled me to create a few trailers that didn’t need to be included in the InDesign document, which kept the main file much smaller.”

On using in5 to export interactivity without coding:

“In5 is a fantastic product. I’ve had a lot of fun using it, and I’m looking forward to seeing what’s possible from here.”

Check out Dave Hickey’s portfolio to learn more about the project and to see more of his work.

Try in5 for yourself