I’ve had a few requests for something like this recently. This extension converts selected frames that contain frame-by-frame animation, classic motion tweens, or shape tweens to every-other-keyframe (aka ‘2’s). Traditional animation uses 2s for content that doesn’t need to be animated at high speeds. Some animators also employ this technique in Flash.  This extension is similar to ToonMonkey‘s Tween 2 Keys, except that it also converts frame-by-frame animation as well as tweens.

This extension can be used to convert SmartMouth automatic lip sync output to 2s (as requested by a user). 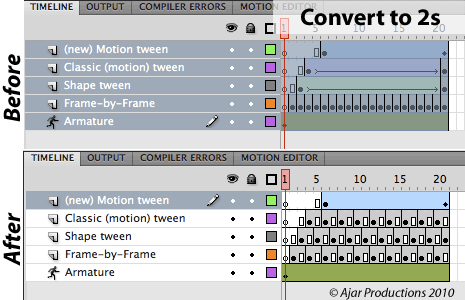 If you want to convert Motion Tweens (in CS4 & up) or Armatures, you’ll need to take one extra step before running this command: right-click on the tween or armature and select Convert to Frame by Frame Animation. I haven’t found a way to script this step yet, but I’ll continue to look into it.